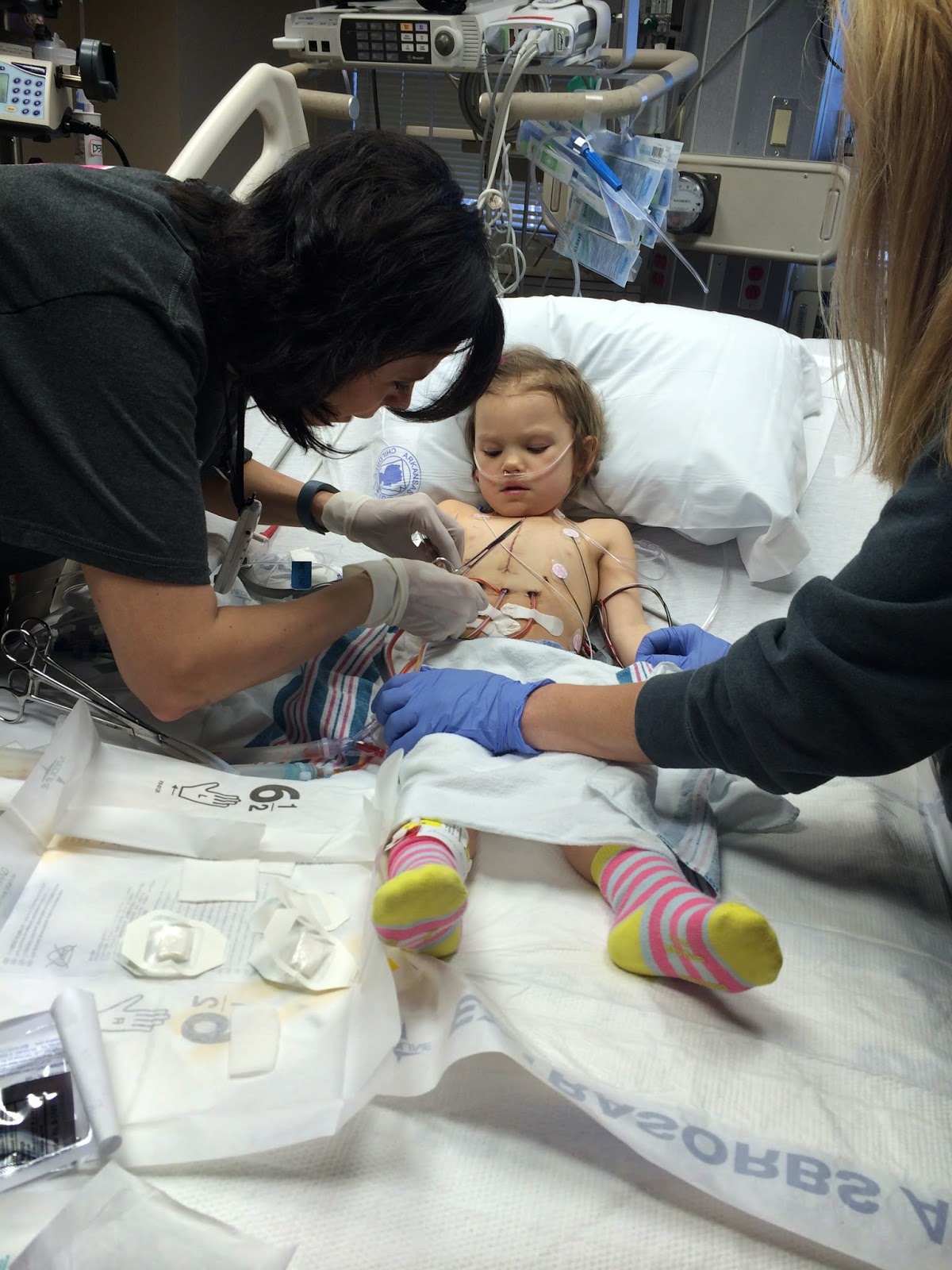 We're seeing progress everyday.  She was able to get her chest tubes and pacing wires removed.  They gave her morphine for this.  She was so brave and didn't complain or cry at all while they removed these.  They said she did better than teenage boys. 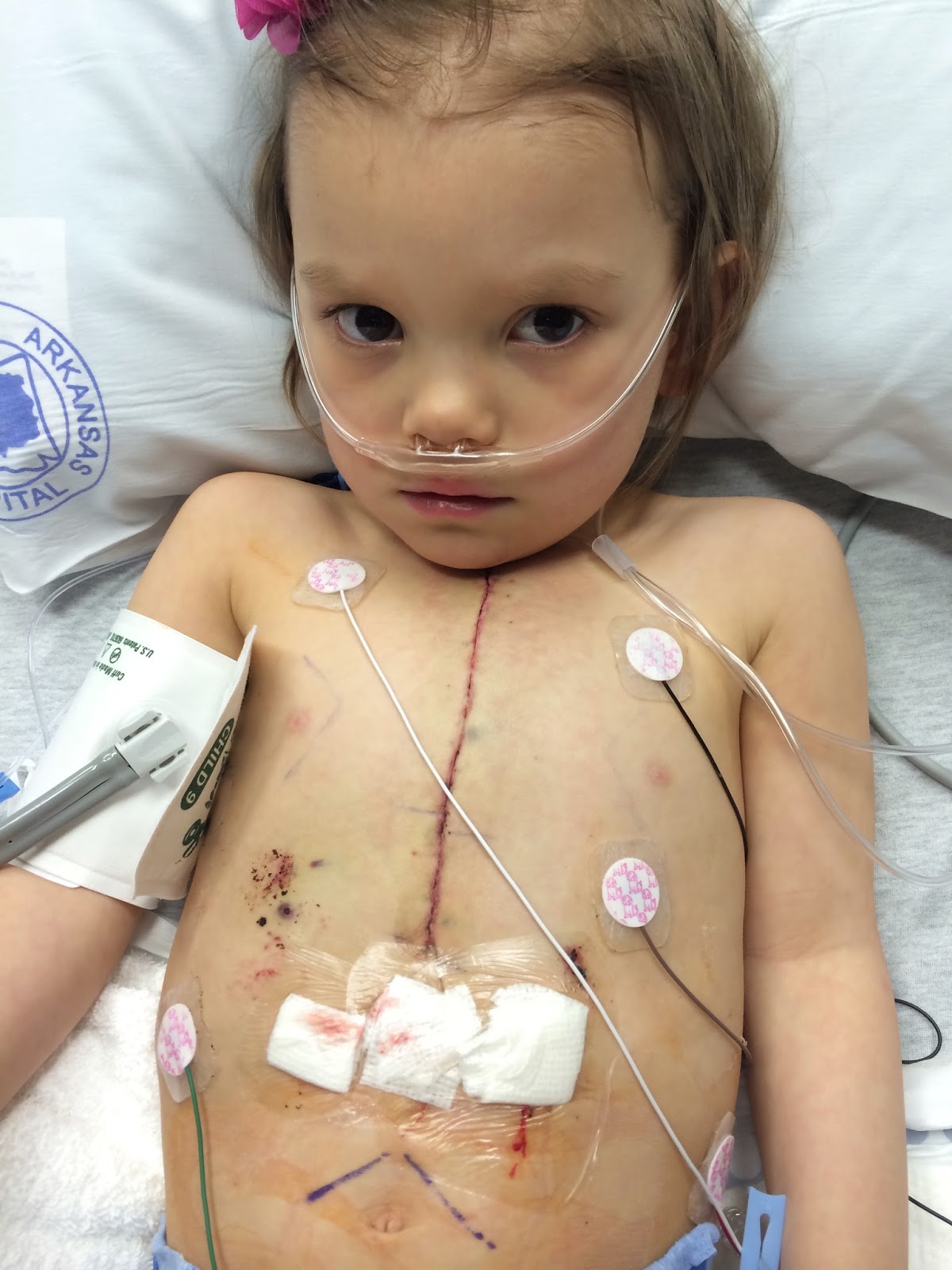 This is how she looked with her tubes and pacing wires removed from her chest. 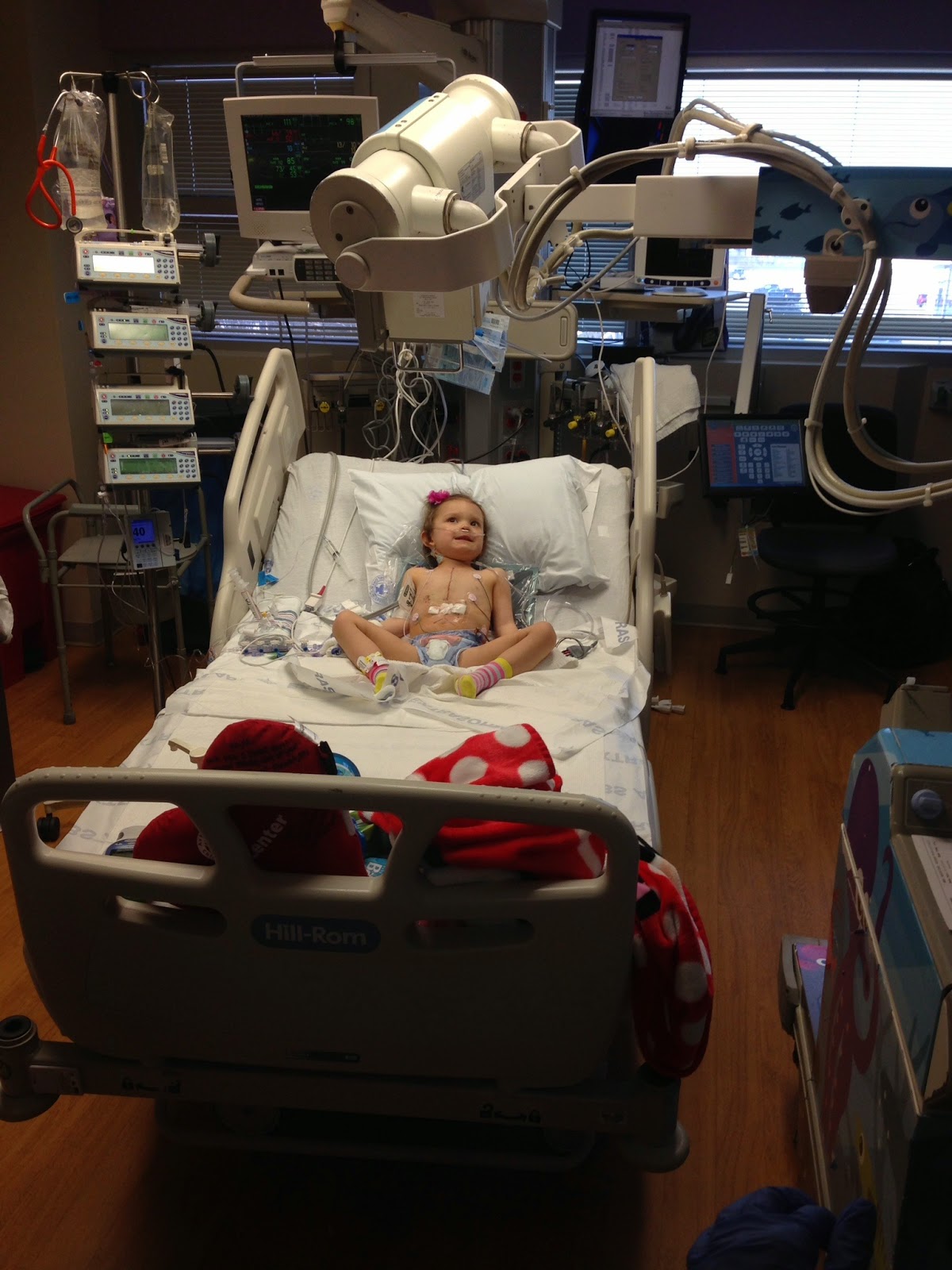 They took an x-ray afterwards and she actually said cheese for her picture :) 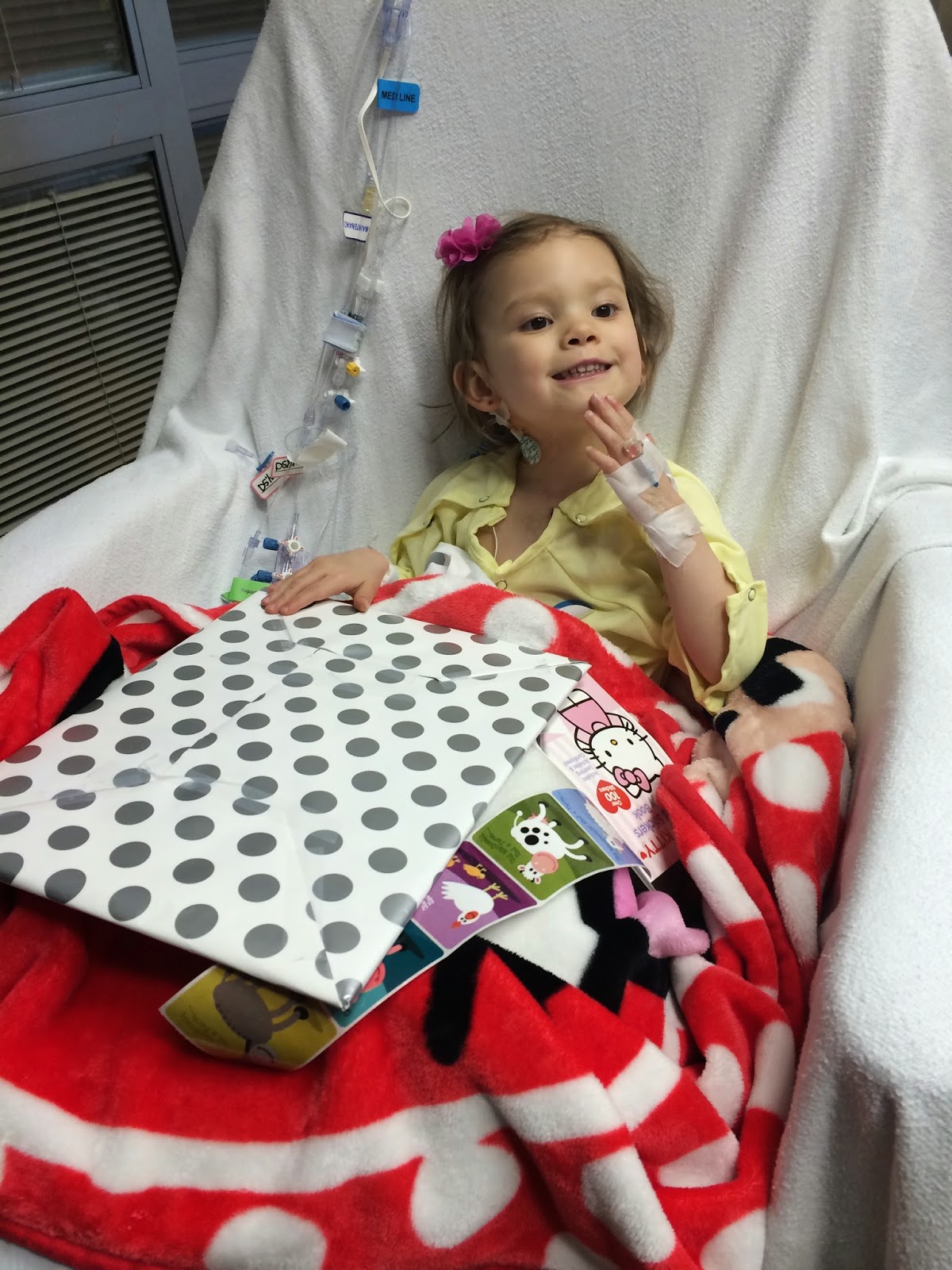 We got her to sit in a chair again too.  She loves all the gifts that she's been getting.  She was also able to get the oxygen removed too.  Her sats are in the 90s which is best we've ever seen without oxygen. 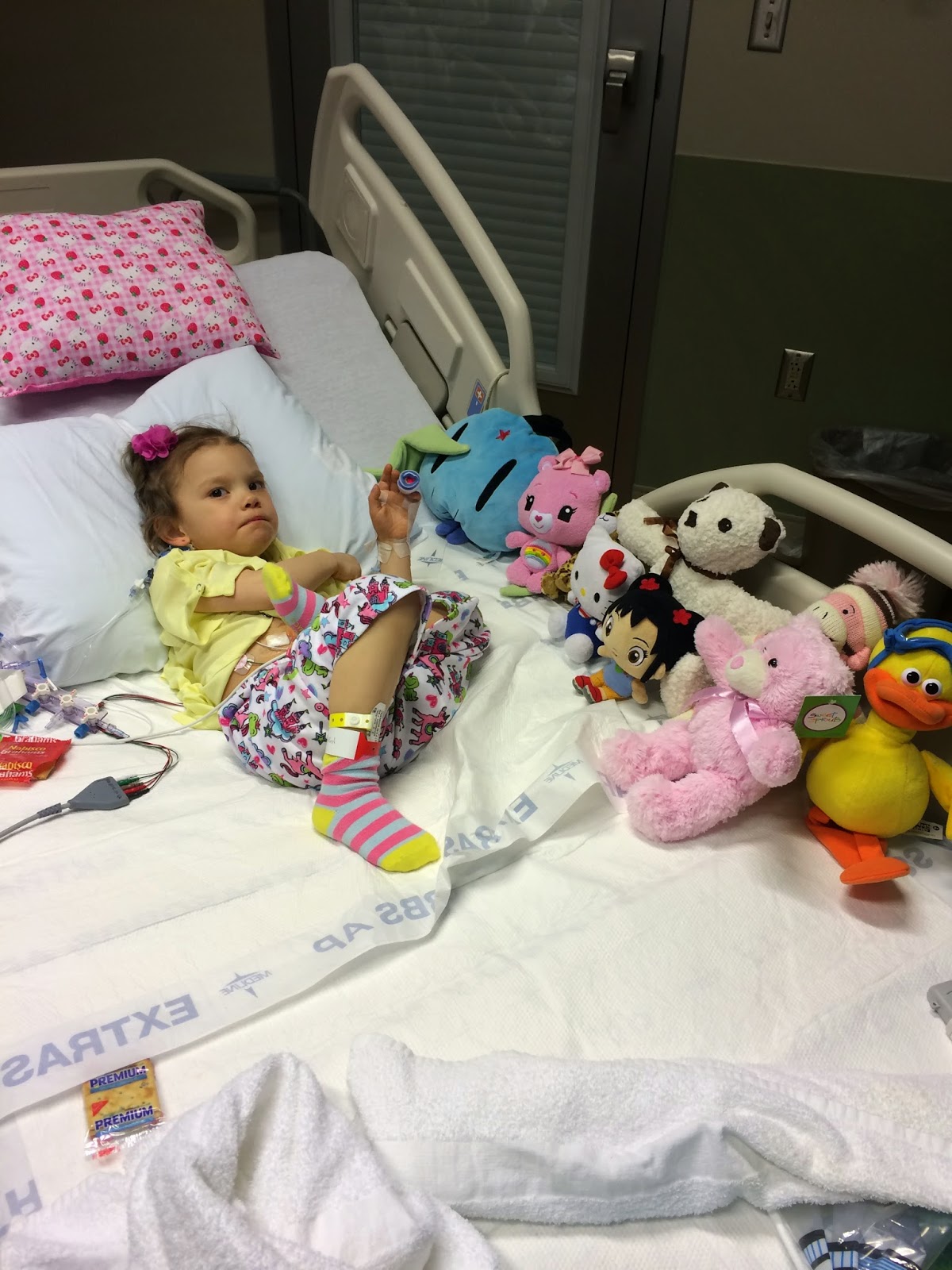 Now that we've gotten the chest tubes, pacing wires, and nasal cannula removed, we were able to move out of ICU.  Yay!  Her mood was a lot better when we moved to this room.

Thanks to everyone who made something for her room.  She loves all the decorations that all her friends made.

She still hates taking her medication.  Just the mention of it makes her cover her mouth and cry.  It's even difficult to even get her to take the half baby aspirin that she is used to taking everyday.   We've tried all kinds of ways of hiding it like mixing with ice cream or apple sauce.  She gags and vomits a lot, but we've been successful a few times.  She knows we're trying to trick her into taking her medications a lot of times too, so that makes it even harder.

She was able to eat some real food today.  The morphine made her nauseous again, so she wasn't able to keep anything down until dinner.  I ordered her some spaghetti, a roll, and mashed potatoes and she ate some of it.  She had a few spoons of mashed potatoes.  However, when I put a little gravy in it, she threw up.  I think she thought I was trying to put medicine in it, and then refused to eat any more of it.

She was pretty grumpy yesterday and would barely talk to us.  She would mostly glare at us or give blank stares.  However, today she started talking more.  She liked having a bow in her hair, getting her toenails painted, and putting some of her own clothes on.  Although, later we found out that the nail polish on her toe nails prevented us from putting the pulse ox on because it can't get a good signal.  The pulse ox's red light is irritating her finger, so we're having to move it every 2 hours instead of every 4 hours.  I had to wait until she was sleeping to remove polish from her big toe.