September is apparently the month of seeing doctors for us...

Cardiology Appointment
Kayla had a cardiologist visit the first week of September.  Her oxygen saturation was high 80s/low 90s which is really great for her.  I rarely see the 90s, so I was happy about that.  I didn't get a chance to figure out what her other stats (height, weight, blood pressure) were because she was having some stranger anxiety, so I was busy trying to calm her down.  She had only been to daycare a few days, but every time she saw someone that was going to touch her she would cry and cling to me.  The doctor looked at her and said she looked great.  I always try to avoid buying Kayla any blue clothes because the doctor is always mentioning how nice it is that she's wearing white or pink.  Blue babies wearing blue clothes makes their condition look worse.

After he looked at her, we went to get the echo.  She didn't like that very much.  We tried giving her some sweeties (sugar water) on a pacifier, but she wasn't interested.  They had to get someone else to help me try to hold her down.  I sang her ABCs and Twinkle Twinkle Little Star which helped a little bit. Afterwards everything looked great.  The doctor said everything was going like expected.  We only have to see the cardiologist every six months now.  Her next surgery will probably be when she is 3.  He said most parents start noticing their kid start to slow down in activity and will start being "bluer," so the parents are usually the ones to say when they think their kid is ready for the surgery. 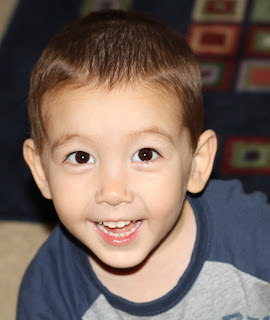 Dermatologist Appointment
David and I had our first ever visit to the dermatologist.  He's got a wart on his thumb and on the back of his hand.  I have a tiny one on my wrist that's been there a couple years.  I figured we'd go together to figure out what to do with it.  Our options were freeze it off or use some prescription cream for 6 weeks.  She said that since David's was close to the nail bed that it might scar.  It would also be painful for him.  I decided that since he loves going to the doctor so much, we'd just do the cream for him.  I don't want to traumatize him.  I got mine frozen.  Three zaps and it blisters.  I think you can buy the same stuff at Walmart.  However, the cream is incredibly expensive...like almost $500 for some tiny packets.  Wow..  Good thing we already reached our out of pocket maximum with our insurance, so everything was free!

Optometrist Appointment
I also had an appointment with the optometrist last weekend.  Apparently, a whole year off from work makes my eyes better!  This is the second time that my eye prescription has gotten better.  I told him I thought they were worse because sometimes stuff far away is blurry but if I focus it gets clearer.  He said that's a sign that my prescription is too strong and my eyes are refocusing to accommodate it.  However, I have astigmatism in one of my eyes.  I was a little worried I'd have to wear 2 different contacts, but he said the astigmatism wasn't bad enough.  Yay!  So I picked out some new glasses and will hopefully get them next week.

Flu Shots
Chris and the kids got flu shots.  I've never gotten one and rarely get the flu, so I don't plan on getting one.  Since David got two last year, he got to do the mist this year.  David is always super excited about going to the doctor.  He tries to make excuses to go like saying he has an owie on his foot.  Kayla hates going to the doctor.  I hope some of David's excitement will spread to Kayla some day because she's going to have a lot more visits than him.