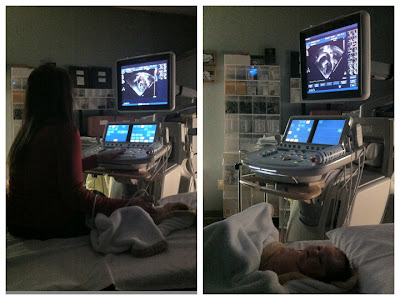 Height:  51.5 cm
Weight:  4.1 kg
Oxygen Saturation:  85%
Kayla hadn't pooped almost an entire week, but as soon as we take her to the doctor and have to weigh her she lets it all out.  It was a big mess, but it was the reason why her weight was lower than what we weighed her at home before we left.  We love going to the clinic in Lowell.  The doctor is nicer and seems more optimistic.  He was the first doctor that Chris talked to after Kayla was born at the children's hospital.  The wait time there also seems to be less.
Kayla still appears to be doing okay.  She was wide awake during the whole echo and didn't cry at all.  We have another appointment the next time the doctor is here on January 5.  He thinks we might be able to schedule her surgery in the next visit.  From reading other blogs and forums online, the earliest they do the Glenn surgery is when the baby is 10 pounds.  So she should be around that weight when she is 3 months old.
Posted by Phoebe at 1:52 PM No comments: 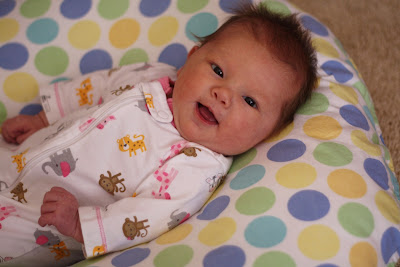 Kayla is making eye contact a lot and starting to following objects.  She's been gaining about an ounce a day.  This week she has started to poop her mustard poo every other day.  She's been sleeping a good 5 hours straight at night.  I don't have any schedule with her yet.  Feeding her on demand and letting her sleep whenever she wants works out a lot better for me. 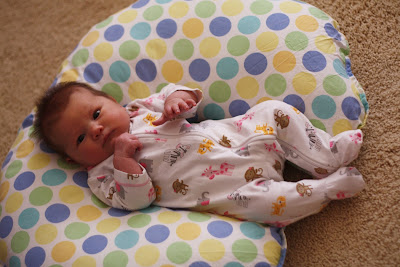 Yesterday we got to see the cardiologist in Lowell instead of having to drive to the children's hospital in Little Rock.  It was nice not having to sit in the van for 6+ hours for a doctor's visit.
Height:  51.5 cm
Weight:  9lbs
Oxygen Saturation:  ??
The pulse ox measured at 78.  However, the doctor didn't believe it because she was looking very pink and not blue.  So we tried to measure it again, but the machine was low on batteries and kept turning off.  We think it was at 85.  When we measure at home it is normally ranging around 80-85.   We are scheduled to go again next week for an echo.  The doctors say that if she stays the way she is until she's at least 3 months, then she can probably skip the shunt surgery.    Then she'll be big enough for the next surgery. 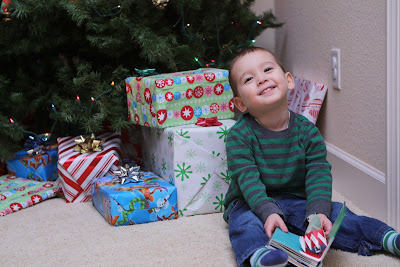 David is doing great.  He's a great big brother and will give Kayla kisses when she's sad (crying) or try to give her a blanket or other stuff that he thinks she needs.
We're trying to potty train him.  Daycare thinks he has peed in the toilet there and is ready for it.  We've been letting him sit on the toilet for the last few months hoping that he'll just go on his own.  He seems to want to, but he pretty much just sits there with nothing happening.   It'd be nice to have just one baby in diapers.  :)
Posted by Phoebe at 4:38 PM No comments: 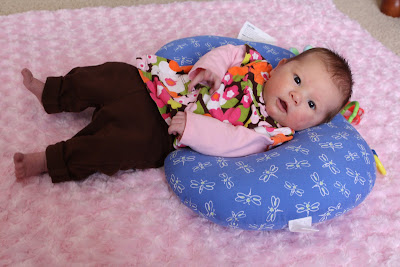 We had another checkup with the pediatrician yesterday.  She got another Synagis shot.  That was the first time I ever had to hold a baby down for a shot.  Usually Chris does those or they don't need me.  Holding down a crying baby while she gets a shot isn't fun. :(


She is growing, but her growth percentiles are around 14-16%.
She can still wear her newborn clothes, but her 0-3 month clothes are fitting her better now.  The outfit above is 0-3 months.  She is wearing size 1 in diapers.
She is a lot more awake these days.  When she first came home, it seemed like she was only awake for maybe an hour each day.  Now she's probably awake maybe 4-5 hours a day, and she is wanting to be held more.  She frowns when she hears loud noises and she's trying to nap.  She doesn't seem too fond of her brother because he's always being loud. 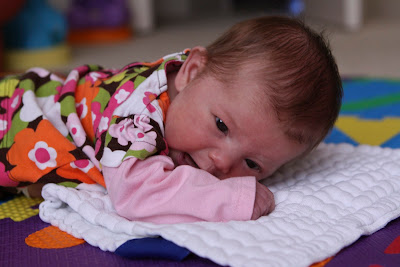 This is about as much as she can lift her head.  She's still doesn't really like being on her tummy.
Posted by Phoebe at 3:54 PM No comments: