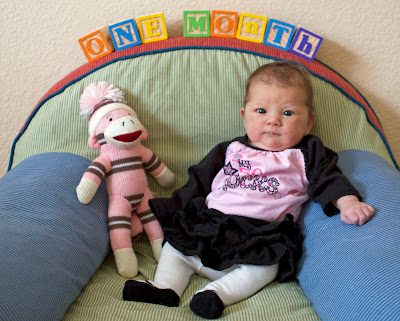 She still sleeps most of the day, but is starting to be more awake.  She tends to be gassy at night starting around the time I want to go to sleep.  I don't really give her much tummy time because she gets upset.  When she cries for over a minute, her face starts turning blue.  She hates pacifiers.  We tried to give her one the other day and she gagged on it as soon as it touched her lips.  She is exclusively breastfed.  I pump every once in a while, but I usually end up throwing that milk away.  I've figured out that it's pointless for me to freeze it because I will probably end up throwing it away.

We made another trip to the cardiology clinic at the Arkansas Children's Hospital yesterday.  She cried a lot when they tried to do the echo on her.  I ended up having to hold her in my arms while they did it.  Her artery to the lungs is getting narrower faster than doctors would like.  If it continues at the same rate, she might have to get the surgery that we wanted her to skip.  We are kind of still just waiting to see how her heart grows.  They said that if her oxygen saturation gets below 75 then we need to call them.   She's been gaining about 20 grams a day since the last time they saw her.  Ideally, they would like to see her gain 30 grams, but 20 is still okay.  We have another appointment in 2 weeks, but we get to go to Lowell instead of driving to Little Rock.
Posted by Phoebe at 1:31 PM No comments:

We had to exchange the pulse oximeter because it kept giving us problems.  The new one that they gave us is a lot better. 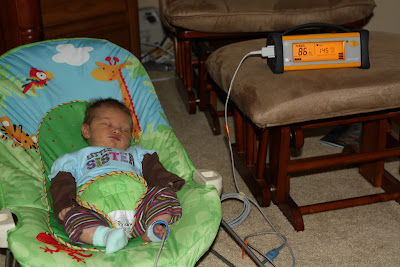 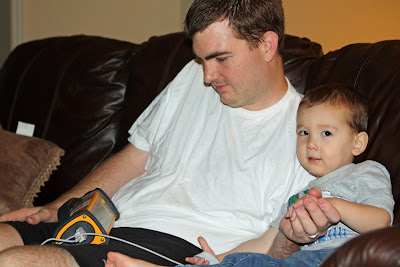 David likes to have his turn, so we check his hand.  On Kayla, we normally check her foot.
Posted by Phoebe at 10:21 AM 3 comments: 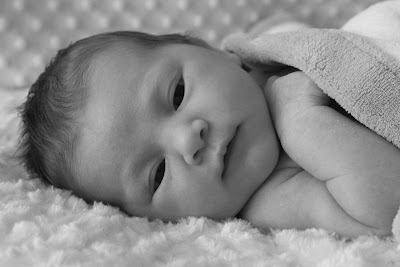 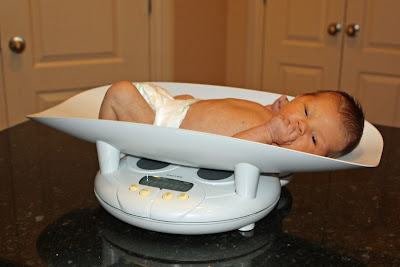 Since the pediatrician said she was growing slowly, I started worrying about how much she was eating everyday.  I ordered this Salter 914 Electronic Baby and Toddler Scale

so I could weigh her daily and also weigh her before/after feedings to see how much she was getting.  Last night and this morning it said she weighed 7lbs exactly.  We'll have to see what she weighs on Monday at the pediatrician's office to see if there is a difference in our scales. 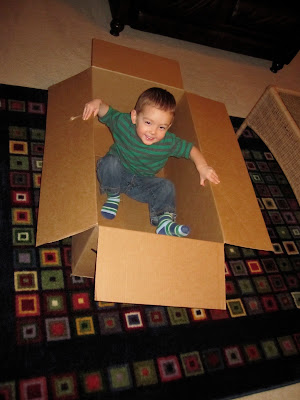 Amazon sent the scale in this huge box...I wonder when David will start outgrowing them.  :) 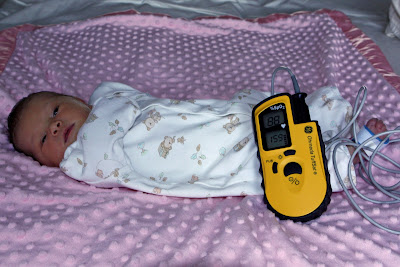 We got a call from the cardiology clinic on Monday telling us that insurance had approved the home surveillance equipment.  Someone delivered a pulse oximeter so that we could measure Kayla everyday.  It measures her heart rate and oxygen saturation.  We were surprised at the monthly cost of it...$450.  I googled the price to buy and it was a little over $500... somebody is making some $$$.
I wish I had written more about David in the blog when he was younger, but at least there's plenty of pictures.  If you don't count Kayla's stay at the children's hospital, I think David had actually been to the doctor's office more by this age because he had jaundice.  I decided to put Kayla in the same outfit and try to pose her the same so we could see the differences between the babies at 3 weeks.  Check out the blog post for David at 3 weeks old.  He weighed over a pound more than Kayla at 3 weeks... 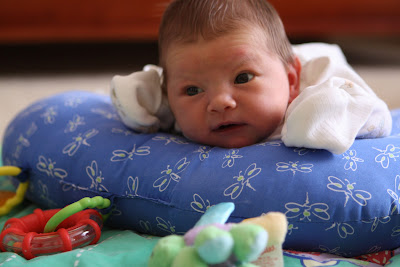 The calendar is slowly filling up with doctor appointments.

We had an appointment in Little Rock at the cardiology clinic at the children's hospital.  They checked all her vitals and she appears to be doing the same.  We're waiting for her to grow to see how her heart does.  We'll probably know more in the next 6 weeks.  We have another appointment with them in a month.  The doctor frowned when we told her that David goes to daycare.  If Kayla gets sick, it could be very serious and need to be hospitalized.


The pediatrician said the weight gain was a little slow, so he wants to see us again in a week.  Kayla also got the Synagis shot for RSV.  That shot is quite pricy.  I hope insurance covers it.  They said the first shot is $1200 for 50 mg and the next would would be $2400!  She has to have these shots every 28-30 days during RSV season.


So how's everybody doing?
I'm doing good....just a little tired from all the night time feedings.  I'm recovering from this pregnancy a lot faster than I did with David.  The swelling in my hands and feet finally went down after week.  I also wasn't in as much pain this time.


On Monday, David went back to daycare and Chris went back to work.  We were a little worried that David might have problems returning, but he was great all day.  They said on the first day he carried a doll around and kept saying 'my baby'.  He is a great big brother and loves to help out whenever he can.


Kayla sleeps all day and is usually only awake for maybe 2-3 hours a day.  She only cries a little when she wants to be fed or held.  She just worries us with her breathing.  Sometime she breathes fast, but the cardiologist said it was normal. 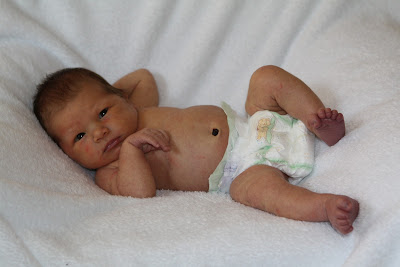