Our Days at the Arkansas Children's Hospital

Kayla was transported by ambulance to the Arkansas Children's Hospital about 2 hours after she was born.  When she was there the doctors did another echo to get a better look at her heart to determine her diagnosis.

Kayla's Diagnosis:
Tricuspid Atresia
D-Transposition of Great Arteries
Unrestrictive ASD
Large Perimembranous VSD
Mild Pulmonary Stenosis
It looked like the heart tried to work around some of the problems to compensate for the heart defect.  This meant Kayla's heart was okay for now and we could let her grow more before having surgery.  They took Kayla off the prostaglandin that was supposed to keep the ductus open.  It normally closes after a baby is born.  If she was stable, then it would confirm that we could wait to have surgery.
Day 2 - October 23 - Monitoring Kayla
I was discharged from UAMS in the morning and immediately went to the children's hospital to go see Kayla.  We were told that if her ductus was closed and she was still doing okay then I could probably start breastfeeding.  A doctor did another echo, but we didn't hear the results until that night.  When the doctor came around, she said the ductus was closed and Kayla was doing great but she wanted to wait another night before trying to breastfeed because the tube going to her umbilical cord was only about 4 cm when it's normally about 10 cm.  If she was still doing well the next day, then the tube could come out and I could breastfeed.  Meanwhile, we were able to go ahead and give her some formula. 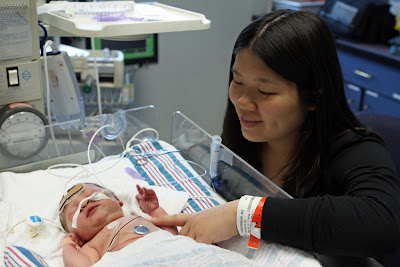 Day 3 - October 24 - Began Breastfeeding
The next morning Chris and I got to the hospital around 5:30am, so that we could give her the 6am bottle.  Kayla was doing great, so they took the tube out of her umbilical cord and allowed me to breastfeed her for the rest of the day.  I was quite excited about this because I had been trying to pump every couple hours, but was never able to get a drop.  Kayla latched on perfectly the first time like she'd been doing it forever.  I was glad about this since David had some problems in the beginning.

Kayla was stable enough to be moved to a different room, but they kept her in this room for another day.  Now all they wanted to do was make sure she was eating good and having good diapers.  They also were going to do another ultrasound to check her kidneys and brain.  I slept in the waiting area that night, so that I could get up every 2-3 hours to feed Kayla.
Day 4 - October 25 - Moved to Private Room
The next day they did the ultrasound and everything was good, so we were moved to a private room.  Kayla wasn't having many wet diapers, so they wanted me to supplement with formula.  My milk hadn't came in yet because I'd only been breastfeeding for a day.  She was just getting the colustrum which is usually enough for newborns.  I didn't think the doctors were being very supportive.  I think they need some breastfeeding training as they didn't really seem to know much about it.    I wanted whatever was best for Kayla and wanted us to go home as soon as possible, so I gave her formula each time after I breastfed her.
Day 5 - October 26 - Discharged!
I was glad that I got to stay in the room all day and night with Kayla.  My milk still hadn't come in, so I started pumping again to see if I was getting anything.  I also went and talked to a lactation consultant because the doctors were making me feel like a failure.  She said she was worried that they were going to make me supplement with formula when she heard I was going to start breastfeeding.  She recommended staying off formula, but said sometimes milk doesn't come in for up to a week.  I felt better after talking to her.


The only thing left to do was give Kayla a carseat test.  This is where the baby has to sit in the carseat for the duration that it takes to go home.  In our case, this was 3 hours.  They monitor her on the machines, and she passed.  We were all set to go home.  The doctors just wanted me to keep supplementing with formula until my milk came in.  They also scheduled an appointment with our pediatrician and an appointment to see the cardiologist again in Little Rock.  She got to home without any medications.  Yay!