When I went to my doctor's appointment on Thursday afternoon, the doctor said I was 4cm dilated and 75% effaced.  He said he wanted to strip my membranes and send me to the hospital to deliver.  However, the nurse said it might not be such a great idea to deliver in the middle of the night, so he told me to go to the hospital around 4-5 in the morning and say I was having contractions.
Chris's mom drove down to Little Rock, so that she could watch David.  Since it's flu season, anyone under the age of 4 is not allowed to visit.  Chris and I went to the hospital around 5am.  After all the paperwork and getting us settled in the room, around 6am they started giving me pitocin to induce me.  They had to stick me twice for an IV.  They did an ultrasound to see how the baby was positioned and told me the baby was 4lbs 13 oz.  This made us a little worried since a few weeks ago when they did the ultrasound they said she was around 5 lbs.  I was 6 cm dilated when I arrived.  I think this might not have been correct because 4 hours later I was 6.5 cm dilated.  It just depends on who is checking it.
They also had to give me an epidural twice because the first time didn't work.  That was probably the most painful part of the whole delivery.  They gave that to me at 8am and it took about an hour for them to finish.  The second time they gave me the epidural I was shaking just from the anxiety of having to get it again.  I think they had to do just about everything twice for me that day.
Around 2pm, I was completely dilated.  The nurse wanted to wait until I was ready to push.  After about 30-45 minutes, I could feel lots of pressure and the need to push.  They started to get everyone in the room and around 3:00, I started pushing.  It only took about 15 minutes and at 3:16, Kayla was born.  Since I delivered at UAMS, the experience was a lot different because it was a learning hospital.  The room was filled with nurses and doctors.  There were nurses that were excited to see their first vaginal delivery.  Chris didn't get to hold my leg or help me hardly any because the nurses wanted to do it all.  This was delivery was lot easier than David's because I didn't have to push as long and I got the epidural before I started feeling any contractions.  After Kayla was born, the doctor snipped the umbilical cord and they took Kayla to get her ready to be transported to the children's hospital.  The whole day I was tired.  Chris says I took several 5 minute naps that day.  After pushing Kayla out, I had a lot of energy.  I was really sad that I couldn't hold her and breastfeed like I was able to with David.  However, they did push her into the room before transporting her so I could see her and take a few pictures.
Chris stayed with me for a bit, then left to go to the ACH to see what the results of her echo was.  The epidural didn't wear off for about 6 hours after I delivered.  I couldn't lift my right leg for the longest time.  It was so uncomfortable.  I spent most of the time wanting to pump but they didn't give me the pump until around 8pm.  I pumped several times that night, but wasn't able to get a drop of anything.
Kayla was 6 lbs 7 oz and 19 inches 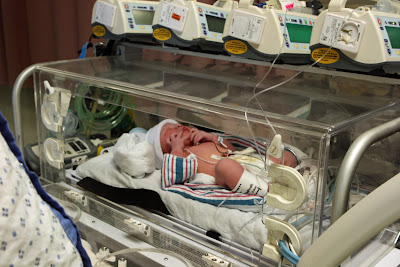