She has Heart Disease :(

We drove to Little Rock twice this week. On Thursday, we went for genetics consultation and an ultrasound. They told us that basically the baby has half a heart with the left side not developing. They called it hydroplastic left heart syndrome. Since they agreed with my regular doctor that there are problems, then we had to go to the Arkansas Children's Hospital on Friday for a fetal echocardiogram.

So on Friday, we went to the Arkansas Children's Hospital. The echocardiogram seemed to be exactly like an ultrasound except they focus on the heart. They focused on it for about an hour looking at the heart at all angles. I fell asleep for a little bit since I was laying down in a dark room and had no idea what they were looking at. After the doctor reviewed everything, he sat down with us and drew picture of a regular heart and our baby's heart. 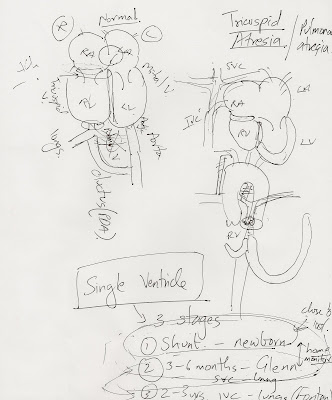 He told us that the right part of her heart wasn't developed. This confused us a bit, since the first 2 doctors said it was left part that wasn't developed. However, we trust him since he appeared to be an expert and looked at it for quite a while. She's got tricuspid artesia and pulmonary atresia. If you want the details on what that is, you'll have to google it.

I'm going to have to give birth in Little Rock at UAMS. Right after she is born, they will have to give her medicine to keep part of her heart from closing. She'll have to stay at the children's hospital where doctors will monitor her and give her an echocardiogram to determine what needs to be done. The doctor said she'd probably be there for 4-6 weeks after she is born. She will most likely have to have 3 surgeries. The first surgery (shunt) will be in the first 2 weeks, the second (Glenn procedure) will be when she is 3-6 months, and the third (Fontan procedure) will be when she is 2-3 years old. She'll probably have to take medication her whole life, but they say that she can live a normal life for the most part.